The Groovy Swing Console allows a user to enter and run Groovy scripts. This page documents the features of this user interface.

The Groovy Console supports several options to control classpath and other features.

There are several shortcuts that you can use to run scripts or code snippets:

You can open any text file, edit it, run it (as a Groovy Script) and then save it again when you are finished.

The Groovy console is a very handy tool to develop scripts. Often, you will find yourself running a script multiple times until it works the way you want it to. However, what if your code takes too long to finish or worse, creates an infinite loop? Interrupting script execution can be achieved by clicking the interrupt button on the small dialog box that pops up when a script is executing or through the interrupt icon in the tool bar.

However, this may not be sufficient to interrupt a script: clicking the button will interrupt the execution thread, but if your code doesn’t handle the interrupt flag, the script is likely to keep running without you being able to effectively stop it. To avoid that, you have to make sure that the Script > Allow interruption menu item is flagged. This will automatically apply an AST transformation to your script which will take care of checking the interrupt flag (@ThreadInterrupt). This way, you guarantee that the script can be interrupted even if you don’t explicitly handle interruption, at the cost of extra execution time.

To embed a Swing console in your application, simply create the Console object, load some variables, and then launch it. The console can be embedded in either Java or Groovy code. The Java code for this is:

Once the console is launched, you can use the variable values in Groovy code.

What you see here is the usual textual representation of a Map. But, what if we enabled custom visualization of certain results? The Swing console allows you to do just that. First of all, you have to ensure that the visualization option is ticked: View → Visualize Script Results — for the record, all settings of the Groovy Console are stored and remembered thanks to the Preference API. There are a few result visualizations built-in: if the script returns a java.awt.Image, a javax.swing.Icon, or a java.awt.Component with no parent, the object is displayed instead of its toString() representation. Otherwise, everything else is still just represented as text. Now, create the following Groovy script in ~/.groovy/OutputTransforms.groovy:

The Groovy Swing console will execute that script on startup, injecting a transforms list in the binding of the script, so that you can add your own script results representations. In our case, we transform the Map into a nice-looking Swing JTable. And we’re now able to visualize maps in a friendly and attractive fashion, as the screenshot below shows: 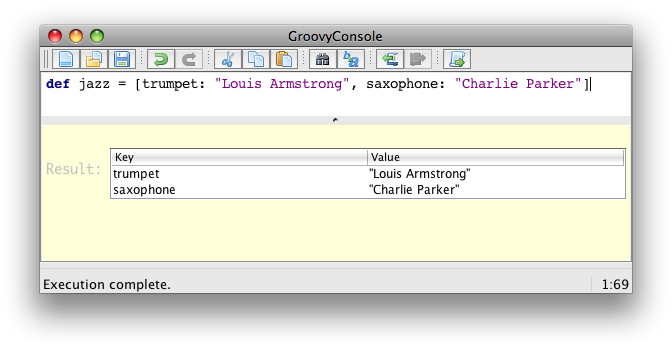 Groovy Console can visualize the AST (Abstract Syntax Tree) representing the currently edited script, as shown by the screenshot below. This is particularly handy when you want to develop AST transformations.